JS Online Article (Lac Labelle on the Day of the Eclipse)

Check out the Journal Sentinel Outdoors Page to read up on my short outing with Paul Smith on Lac Labelle this week. 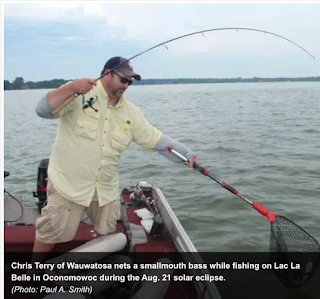 I still have some openings late next week and around the holiday.

Water levels vary from system to system, but weed growth is still very heavy. Water temps are in the low to mid 70's. There's still some solid pods of baitfish out there, and that of course is the key to finding active fish.

Panfish have  been up and down over the last two weeks. Crappie and bluegill continue to bite along weedlines or suspended out over deep water, as well as in mid-depth weeds, but keepers have been hard to come by unless you're working deeper fish. Plastics tipped with live bait, tail hooked minnows and leafworms fished vertically or with slip bobbers will produce. Late afternoon and  early evenings have been more consistent, as is typical for this time of year.

Note: I had the kids out yesterday for a bit and we had some nice keepers, but they were suspended off the weed edge. To get the quality fish, you had to get your bait down below the smaller fish at the top of the school.

Largemouth continue to run late summer patterns. Fish are feeding in short spurts throughout the day. On the hot sunny days, look for them around docks or slop, or out deep in 12-15 FOW. On the cooler cloudy days, look for active fish in sand/rock or rock/weed transitions in 4-8 feet. Topwater bite will be good, especially early in the morning, then fish will be moving around the rockbars, sand/weed transitions or on the shallow flats. Current areas (especially areas of strong current) are holding some aggressive smallmouth on many lakes right now, but overall smallmouth fishing has been spotty.  The fish will be deeper than you think they should be in most cases. Jigworms, grubs, minnowbaits and small white crankbaits can be dynamite, but don't skip the tubes and lipless crankbaits.

Pike fishing has been slow, but steady. Lots of undersized fish are being caught in the shallow and mid-depth areas. I'd consider moving out deeper and using live bait on a slip sinker rig, trying to connect with active fish in 18-22 or 22-25 feet of water. Nag has been giving up some quality keepers, but there's active fish on every area lake right now.

Walleye fishing has been good, but you might have to get a little tactical and slow WAAAAAAAAAAY down to get bites. People still fishing at night are reporting some success off the deeper sand flat areas, but a few decent fish are being caught out of the shallow weeds very early in the morning using rapalas or similar minnow baits, then using lighter slip sinker/lindy rigs with leeches or shiners. Some fish have been very very shallow during low light periods this week. (Caught one Monday in 18" (yes, inches) of water).

Musky are getting more active, but anglers are still reporting lots of lazy follows. Gliders, bulldogs and cow-girls have all produced limited action in the past week, but most of the fish are low to mid-30's  inch fish. Topwater is working just before the sun gets up and just after it goes down. As the water begins to cool, the action will pick up considerably.

Just a quickie. I have some openings around the Labor Day Holiday Weekend. I didn't book anything ahead of time because I wasn't sure what my schedule would be up in Minnesota, but it turns out I will be in town and available.