I had a quiet New Year's Eve, and I was up early this morning. There was a bunch of fishing shows doing their end of year retrospective episodes, and it got me to thinking about my 2008. Fishing wise, I think it was a pretty good year.

Taking Paul Smith, the new Journal-Sentinel outdoor writer out for an article was great, as was the plug that the shop and I received in the Milwaukee Magazine article.

The local open water season started good despite the very high water, and my first trip out after the opener brought in a trophy smallmouth for my clients. I also spent alot of time guiding on Silver Lake this year which resulted in lots of days with a solid number of fish caught. I had three days where my clients caught more than 100 fish there.

The flooding kept me off my usual Lac Labelle trips during late May and early June. It also cut down on the time I spent during the early season on the Rock River. My best walleye fishing ended up being in the late part of summer on Lake Koshkonong when the bite got hot. I had some really fantastic days pulling spinner harnesses over the rocks and sand.

All of these things were great, and I'm grateful that people give me a chance to share my knowledge with them, but the highlight of the year has to be the times I spent with my son, Shannon, in the boat and fishing off the pier when we took a short family vacation up to Eagle River. He wasn't even two years old for the trip, but he took to fishing the way I had always dreamed that he would.

Sitting on the pier, catching potato chip sized bluegills with my son, was for me, better than everything else that happened on or off the water this past year. 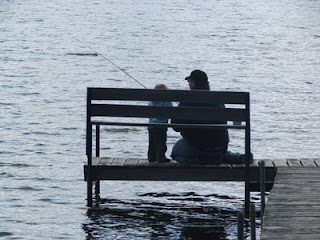