A tale of two weeks this week. Monday and Tuesday...fishing was very tough, and I had to work hard to junk fish/scratch fish together. Wednesday was one of my best days in awhile and Thursday I was out with my Daughter and caught a solid batch of fish.

I heard similar reports from other anglers this week as well.

Bluegills are almost done spawning on most area lakes. If you're looking for action, areas of beds can still be found in the shallows, but they've been heavily picked over. If you want some bigger fish, move out to 9-15 feet of water and look for beds in gravel and sandy areas. Vertical fishing with a split shot and live bait rig works great, as does pulling a 1/8 ounce lindy rig with a short leader through likely areas. (Try panfish leaches if you can find them, plastics tipped with waxworms or leafworms.)

Bass are into an early summer pattern, with lots of areas and techniques producing. On cloudy days  topwater and crankbaits are catching lots of fish over open water areas, especially weed patches (look for milfoil beds especially) on the mid-depth flats in 6-12 feet of water. On sunny days, especially those with lots of wind, fish are tighter to cover or using shallow sand and rock bars in 3-8 feet of water. Plastics, flipped, skipped, pitched, wacky or texas rigged are great ways to target these fish. Live bait on slip sinker rigs are catching some nice fish for anglers making solid drifts over productive areas. Fish were in both deep and crazy shallow water this week. Ned rigs continue to put fish in my boat, but with the weeds up now, curl-tail grubs, pre-rigged worms, texas rigs, jig and chunks and even skirted grubs are producing. It seemed like the active fish were feeding higher in the column than is typical for this time of year so horizontal presentations or slow falling vertical were the best. (For me anyway!)

Pike fishing was fairly steady this week. Fish are feeding early and late, and the best way to find them is to find concentrations of baitfish, and then fish through those areas with a purpose. Active fish can come shallow, so look for shallow flats or weedy areas with easy access to deep water. The usual casting techniques will catch pike--spinners, lipless cranks, buzzbaits, spoons...but don't overlook a Husky Jerk, Shadow Rap, Floating Rapala or similar 3 hook jerkbait.


Walleye fishing has been slow and steady but much better on the windy days. Fish on Lac Labelle, Oconomowoc, North and Fox Lake are using shallow weed edges but with the brighter sun days ahead, if you can find a weed edge in 15-18 FOW, sit on it. Jigging with live bait or drifting with lindy rigs/ spinner harnesses has been productive Trolling with Shad Raps/Flicker Shads is picking up, as is typical for this time of year....slower speeds over the deeper part of the basins appears to be the trick. I didn't hear anything one way or the other on walleyes on either Nag or Pewaukee this week...so take my recommendation with that in mind.

Musky fishing continues to be about mid summer average. The larger fish have started to move out to the breaks, but there's still a solid number of fish patrolling the shallow water, feeding on schooled up panfish. Gliders and bucktails seem to be producing the most follows, but converting fish has been difficult. A few people are starting to troll the deeper basins, but I had less positive reports this week than last week. Big tip: On the water observation this week clearly demonstrated a relationship to moon phase on musky activity. If you can, fish when the moon is down (ie set)...moon phase is certainly changing fish activity levels right now. I personally saw multiple active fish in the shallows chasing yellow perch and hatched out shiners even during mid-day this week.

Good Luck Out There!
CT

Didn't get find a taker for today's last minute opening, so I called a buddy and hit the water.

Tough day yesterday turned into the best day of the season today. With the radar showing the potential for some nasty mid day storms, hit the water early with the intent of bailing around 10am before the weather got bad.

I love Golden for half days runs like this, and after struggling on Oconomowoc yesterday, was looking for some action fishing on my surprise day off.

Turned into a perfect day on the water. Steady, but light breeze kept it cool, and as the storm went south, even had enough sunshine peak through the clouds to warrant some sunscreen. Temperature about 65-72 all day.

Got on the fish right after we hit the water around 5:30. Steady action all day. I stuck to my staples...finesse plastics and texas rigs but my partner was digging in the tackle box some...throwing some topwater, swimbaits and a variety of plastics. 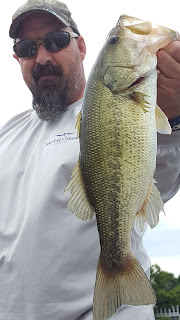 Lost count of the fish we caught but had to have been around 50 LM and a couple of pike including a 31" on a topwater prop bait. The bass were the usual range of fish on Golden...but Highlight fish of the day.... this tank. We had more than 10 better than 17" as well. 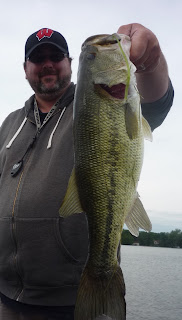