Cheers,
CT
Posted by Chris at 1:41 PM No comments: 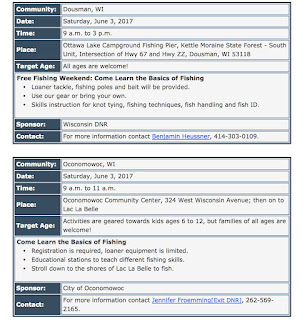 2.) American Legion Post 166 is having its 4th annual multispecies fishing derby this Saturday: 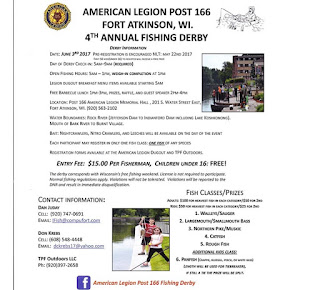 Okauchee has a pair of tournaments scheduled for Saturday: WABTA (Bass) and Quad-graphics (Multispecies) (Details)

Pewaukee has a Multispecies tournament on Saturday (Details)

A couple things for your attention.

1.) I'm running my usual special (20% off) on pre-paid trips as a present for Father's Day. Need a gift for dad?...Why not give him the gift of time (on the water)? Spend some time with Dad/Grandpa (and Me) fishing a local lake!!!  Email me for the details.

2.) I have 3 openings the week of June 12th for half day (6 hour) trips on "Lake X." Lake X is a local lake with extremely limited access. As a result, the fishing on Lake X is usually much better than average, and I've had some of my best days out there right at this time of year. This might be your last opportunity to fish the lake before the public does...you don't want to miss out.

I don't want to say too much here, but if you're interested in learning more about this special opportunity, email me right away...there's only three half days available.
Posted by Chris at 9:14 PM No comments:

I have been on the water quite a bit since the last report. Inconsistent is my new favorite word.

Yesterday and today were great examples. Yesterday (5-30) out on Okauchee and could do no wrong. 6am-2pm. Worked some shallow rocks and drifted some flats. Moved around to hit more spots, but caught fish everywhere we fished. Didn't keep a good count, but easily 25+ LM plus some rockbass. Some decent fish, but nothing north of 17.5. Some solid keepers in there...they are definitely on the feed. Action was steady throughout the day. No complaining about how the day went, but just couldn't find any of the larger fish today.  Nothing fancy: Wacky (including my new slingshot rig), Ned Rigs and Chompers Skirted Grubs on the rocks plus jigworms on the flats.

Today (5-31): spent some time this morning upgrading my electronics then headed over to Moose mid morning. Caught some fish...but it was slow and we had to grind to get them to bite. Not sure what was wrong, but couldn't get anything steady working out there. I know its the post spawn for the bass, but even the pike were a little sketchy today.

Everyone has good days and bad days...but I'll tell you, when its been on, it has been great...on the other days, I'm putting fish in the boat, but I'm grinding for them. The better part of consistent fishing is patterning fish....and it has been difficult to do it day to day.

Water temps are in the low to mid 60's in mainlake areas, mid to upper 60's in the protected bays/ dark bottom areas. Weed are starting to show up, but we're just a couple weeks out from the photocycle shift, and there's not much to talk about. Notably, I'm not catching solid numbers working weed patterns right now. Water is still very high, and some of the lakes have speed restrictions....make sure to check the sign before you head out.

Panfish bluegills are staging for the spawning process. Crappies are at the end of the run, (saw some dark ones near some brush the last couple of days) but the bluegills are just getting started. I'm starting to see some beds in the shallow water, especially in areas of sand or small gravel, but these tend to be the smaller fish. If you're looking for decent keepers, you need to look for those fish in 12-15 FOW. They are hard to find with the eye but a good starting point is the deeper water adjacent to areas where you see beds in the shallow water. Rock Bass have been biting like crazy everywhere, and could be a solid option if you're heading out with the kids.(Best bets: Middle Genessee, Lower Nehmabin, Nagawicka, Okauchee, Garvin, Keesus, School Section)

Largemouth are at the end of the spawn. You may still find a few fish on nests, but many are defending fry or starting to feed on juvenile bluegills. Most fish are patrolling shallow flat areas or are feeding hard around rockpiles and roadbeds. Look for them around scattered weeds or near where bluegills are starting to spawn. This is topwater season, and poppers, jointed floating minnows and smaller walk the dog baits (spooks) can really produce. As the sun gets high, look for fish around docks and in first deep water adjacent to longer points. Wacky, Jigworms, Jig/chunk, Skirted grubs, pre-rigged worms, Texas rigs and Sliders will all catch fish. (North, Keesus, Okauchee, Pewaukee, Oconomowoc, Golden, Forest, Silver, Ashippun.)

Northern pike are making move out to the deeper weed edges. Look for them in 10-15 or 12-18 FOW. Live bait on slip sinker rigs is always the most consistent approach for larger pike. If you're looking for faster action...square bill or lipless crankbaits, buzzbaits, spoons, oversized grubs, Husky Jerks or spinners fished around shallow weeds, especially in flat areas will all produce. (Pretty, Golden, Kessus, Fowler, Okauchee)

Walleye are using mid-depth weeds in 8-15 FOW. Pitching jigs tipped with live bait into the holes on the weed edges or ends of weedlines has been very productive. Back trolling lindy rigs or pulling spinner harnesses along th 12-18 FOW transition is producing some keepers. (Pine, Nagawicka, Oconomowoc, North, Fowler, Lac Labelle).

Trout Stocked Trout fishing has still been good on many of the local lakes that got fish. The cooler weather and rain has pushed many of the fish deeper than they have been.