You can read the entire report here.

I've pulled some images out for the local highlights: 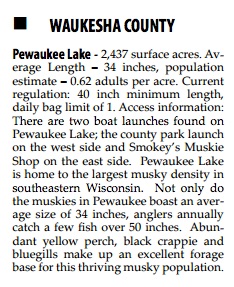 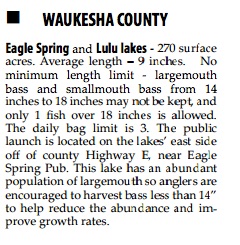 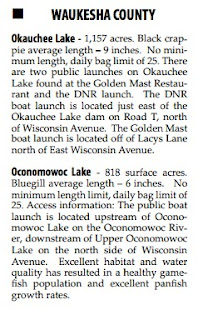 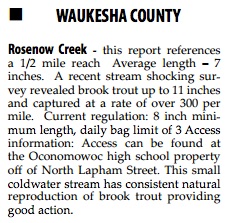 Spring runs are in their early stages, but they are definitely gearing up.

River fishing is in a very early stage, but steady positive reports are starting to trickle in. Sounds like there's fish being caught in the usual spots up north, Oshkosh, at Fremont and at Depere. The reports from the Dells have been more consistent, but I'm hearing some scattered reports from the Rock River as well. The mouth of the river at Blackhawk has been very active, especially during prime feeding windows.

As always: Here's a list of great resources on Rock River conditions in a post from a couple weeks back. Always give it a once over before heading down.

A side note: When Musky Mike was alive, he and I would talk frequently about annual fishing patterns, and things to watch for. It is a conversation I have had many times with some of the best fisherman I have met through the years.

Texas bass fishing legend Jackie Walker taught me more about fishing in a single weekend than I could have learned in years of trial and error on the water. He too was a big proponent of the concept that in each year there are a couple of near perfect fishing opportunities that arise. My friend Dan Juday and I hit one of these last year on Golden Lake, catching a feeding window just ahead of a massive front and it was the best day of fishing I had during all of last season.

Friends, I believe we are approaching this year's first window of opportunity. The precipitation that will fall over the next week, combined with a slowly rising temperature and a Full Moon Phase in the cards for next week, you have a solid window opening for river walleye fishing between now and St Patrick's Day.

Small males are already staging for runs to the spawning grounds, the bigger fish usually follow them in 7-10 days later....which means this year, things are right on schedule. Nature takes care of itself with these things, and we're looking at a solid window of opportunity starting this weekend.

Closer to home: the water on area lakes is (mostly) open, but still cold. A few fish are roaming into the shallows, especially the dark bottom bays that open/warm earlier. Still a bit on the early side, but expect things to start picking up when the weather stabilizes a bit towards the end of next week.

Good luck out there and be safe.