Well gang, we have some serious fishing going on right now. The bite is very good, and the water conditions have stabilized, even if the weather hasn't. If you've been waiting to get on the water, you're missing some solid fishing right now. You can even make good use of my Father's Day Special. Information Here

The bluegills are almost done spawning. Better panfish are being caught out of the deeper sand and suspended over deeper water. You'll still find some fish up in the shallow to mid depth on the nests, but the bulk of the fish are starting to set up for summer. If you're looking for decent keepers, you need to look for those fish in 12-15 FOW. They are hard to find with the naked eye, so you'll need to do some moving around with your electronics. A good starting point is the deeper water adjacent to areas where you see beds in the shallow water. (Best bets: Middle Genessee, Lower Nehmabin, Nagawicka, Okauchee, Garvin, Keesus, School Section)

Bass are working traditional summer patterns, but the weather is making patterning fish difficult from day to day.  Docks, rockbars, slop, scattered weeds on flats and the deep weedlines have all been producing. The best bite for largemouth has been weed edges in 6-12 feet of water. Slop bite is picking up steam on many of the smaller lakes. The topwater bite has been steady, but most topwater fish are being caught before 8am on sunny mornings. Pop-R's with an orange or red belly have been producing some nice schooling fish and Redfins and jointed rapalas are catching some nice smallies. When on the feed, fish are patrolling shallow flat areas, and covering water on the larger flats can really run up your numbers right now.  As the sun gets high, look for fish around (but not necessarily under) docks and in the mid depth water adjacent to longer points. Wacky, Jigworms, Jig/chunk, Skirted grubs, Pre-rigged worms, Texas rigs and Sliders will all catch fish. (Keesus, Okauchee, Pewaukee, Oconomowoc, Golden, Forest, Silver, Ashippun.)

Musky fishing continues to be good but the pattern has been evening or night fishing.  Day time patterns have been inconsistent. The most active fish have come on deep divers, gliders and large tubes fished along the deepest weedlines you can find. A few are being caught on topwaters, especially on Okauchee, Fowler and Lac Labelle, but the trolling crowd put some quality fish in the boat this past week including at least one 51" on Okauchee.

Walleye action has picked back up. Leeches under slip bobbers are catching fish in 12-15 feet, especially around weed/rock transition areas. Suckers fished on a split shot rig have been taking some better fish, especially in the late evenings. Weededges and sand grass are the areas to key on, especially in 15-22 feet of water. Lake Koshkonong has a hot bite going on in the main basin in 4-6 feet. Pulling harnesses or cranks has been giving up a mixed bag of walleyes, pike and whitebass. Most walleye action is coming at less than 2mph when trolling with meat.

Pike action was red hot this week, with lots of people fishing for bass catching bonus pike. Fish the weed flats and outside edges with spinners or live bait. Smaller, wide wobbling crankbaits, buzzbaits and lipless crankbaits are really producing for the action seekers. Reapers, inline spinners and large jerkbaits are catching some better fish. Northern pike fishing with live bait is a great way to fish right now. Look for major structure in the early mornings and late evenings and drift with lindy rigged suckers catching the majority of the fish.

Final Thought: I was out several times in the last week, and on most days I fished more than one lake. The fishing has been unreal the last 10-12 days. Drop that golf club, grab your kids and get on the water.

If you've got specific questions: Feel free to email me.

I'd like to once again offer a special on guided trips in honor of Father's Day. Book a trip for an open date in June or July and I'll knock $50 off my standard rate.

Time is limited, and I'd like to fill out my remaining dates. Email me for more information
Posted by Chris at 11:57 AM No comments:

It was another great year for Take a Vet Fishing on Waubesa.

I guided for two vets again this year, my fourth year of guiding for the event. Dan, who has been with me the last couple years was joined by Jerry.

We were out early, and on the fish right away, landing 4 bass in the first 40 minutes or so. Tried working a 4-6 FOW contour, but the fish we had caught were shallow, and we had to stay in on them to get bit. I though the fish would be tight to cover with the massive cold front, so we spent some time fishing weeds, but in the end, we started working some shallow water, and we stayed ridiculously shallow the rest of the day.

Final Score 24 LM (12-18") and 3 smaller pike. The nasty weather that went though missed us, and the bite was slow, but steady.

Not a bad morning.

Ned Rig and Jigworm when the wind was blowing, and wacky when it laid down. Caught one fish on a frog near some slop and Dan was throwing a small paddletail swimbait you can see in the first picture. 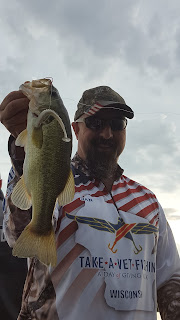 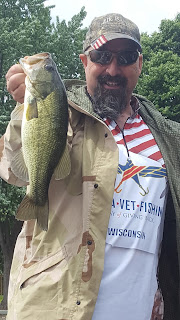 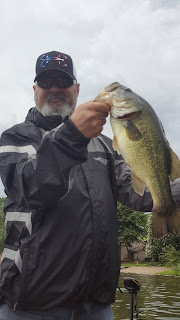 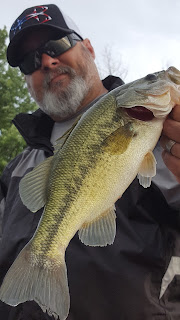