This weekend is Free Fishing Weekend. You can fish without a license, which makes it a great time to take new people out.

Conditions: Right now most lakes are in the low to mid 70's. Weed growth is still behind, but is picking up, especially the milfoil. Water remains high on most lakes, and is fairly stained for this time of year.


Bluegills are on their beds. Current areas and spawning areas (like sandy or gravel areas) will hold the most fish. Smaller gills spawn up shallow, but if you're looking for nice gills, try 8-12 feet of water. Leeches on a split short rig are the best way to chase these larger pannies, but Waxworms, redworms and plastics are taking fish. (Try Okauchee, Garvin, Golden Nagawicka, Forest, Middle Genessee, Ashipunn, Pretty and Lower Nashotah)

Crappie fishing has been hit or miss. People are catching some nice crappies, but consistent numbers have been hard to produce. A few crappies are being caught over deeper water near mainlake structure, and you may still find a few spawning crappies are in shallow bays near weeds, wood laydowns or reeds. Minnows, hooked through the tail on a small hook (#8 or #10), waxworms and plastics have all been taking fish. (Try: Okauchee (Red Hot), Garvin, Moose, Kessus, Nagawicka, Golden and Pine.)

Largemouth Bass  are in the full-on post spawn period. A few fish are still spawning, but not many. Topwaters (Pop R, Redfins and #11 Floating Rapalas) and crankbaits (Norman Baby N's, wiggle warts and rattletraps) are catching fish over open water areas, especially weed patches on the mid-depth flats in 6-12 feet of water. On the sunny afternoons, the fish have been tighter to cover in 3-8 feet of water and fishing around the docks and in the slop has been picking up. Plastics: Texas rigged lizards, tube jigs skirted grubs, and wacky worms are all catching fish, as always, if the bite is tough, try a jigworm. Live bait on slip sinker rigs are catching a few fish for anglers making solid drifts over productive areas. (Try: Okauchee, Oconomowoc, Pine, Kessus, Nagawicka, Moose, School Section, Pretty, Golden or Emily)

Smallmouth Bass fishing was still slow as fish finish their post-spawn pattern. Minnowbaits, like size 11 or 13 floating rapalas are actually a great way to catch these fish. Keep it simple, black and silver or chartruese and white are the best. If it warms up this weekend and the early part of next week, look for them on sand/rock transition areas and  target them with tubes, skirted grubs or twister tail grubs. (Try: Oconomowoc, Pine, Lac Labelle, Nagawicka, Pewaukee, Beaver or the Bark and Oconomwoc Rivers.)

Walleye fishing went south with the weather this week. Fish are still using shallow weeds and weed edges in 6-12 feet. Slip Bobbers, jigging with live bait or drifting with lindy rigs have been productive, especially when using small suckers or leeches for bait. In the evening, a few anglers are still catching fish by working rapala minnow baits over isolated weed clumps on mainlake points and humps, but this bite also dropped off with the weather changes this past week. (Try: Oconomowoc, Lac Labelle, Nagawicka, North, Pine and Fox)

Northern Pike fishing was slow, but steady. The best way to catch pike is a small sucker or medium to large shiner on a slip sinker rig with a flourocarbon leader. Drift along the deeper edges of the weeds you can find in 12-18 feet Up shallow- Lipless crankbaits, buzzbaits and spinner baits are still producing. (Try: Okauchee, Kessus, Garvin, Nagawicka, Pine, Moose, Fowler, Golden, School Section, Emily)

Musky fishing has been slow. Anglers continue to report lots of lazy follows, so figure eights are an absolute necessity, and having a sucker out on a quick strike rig is always a good idea. (Try: Okauchee, North, Pewaukee, Fowler and Lac Labelle)

Around the area: Fishing on the Rock River, anglers are still catching some whitebass, walleyes and catfish between the Jefferson Dam in and the mouth at the Indianford Dam.

Trout fishing in the stocked lakes and ponds continues to be a great way to catch some keepers. The local ponds, Lower Genessee, Ottawa and Lower Nashotah continue to give up fish.

Results are posted from Sunday's WABTA bass tournament on Okauchee.

Not surprising...post spawn conditions led to some smaller bags than the tournament a couple weeks ago. 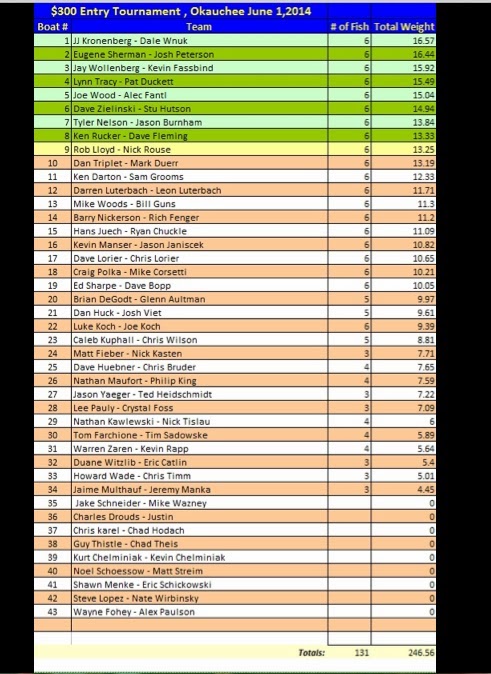 There's been some movement on a public launch for North Lake.


"The application calls for a 25-stall gravel lot of mixed-use parking to be built off of Highway 83 near the downtown business district for unincorporated North Lake."


The meeting is Tuesday, June 24th at 7pm at the Merton Town Hall.

The story from the Lake Country Reporter: is here.
Posted by Chris at 3:20 PM No comments:

I have some dates I'd like to fill in the next couple of weeks and I can offer a special rate ($50 off my half day/$100 off my full day) my usual fee to do so.

We can fish for bass, walleye and or musky on a variety of local lakes. I have weekday availability during the weeks of the 9th, 16th and 23rd, and I have weekend options on the 15th, 21st and 22nd.