Well it was a nice little trip, but the weather and the fish wouldn't cooperate. I'd go back, but do a few things different.

The lake looks to be a great northern and musky fishery. It certainly looks to be the kind of lake where one should be able to catch some walleyes, which is what I really wanted to do.

I only caught one walleye, and the pike and musky fishing was pretty slow. Caught a few shorter fish By late in the afternoon on wednesday I got frustrated, and switched to bass fishing, and then the fishing got interesting. Caught several fish up to 22 inches using rattle traps, rattling rapalas, and a jig/chunk combo.

The highlight of the trip for me was seeing my two year old son Shannon take to fishing. He hasn't really fished yet, but I gave him a short ultralight pole to play with while we were at the cabin. By the end of the first day, he was pointing to the pier and babbling "rod?!?"

As a result, I spent a good deal of time sitting on the dock or in the boat with him catching bluegills. He even turned the handle on the reel a few times while I was bringing in fish. He liked throwing the small perch that were about the size he could hold back into the water.

When we would walk up from the pier, he would dutifully put his rod next to the ones I had set out for our friends behind the cabin. When we would go outside, he would walk right over and grab "his" rod and walk down to the pier. A couple times he handed me his lifejacket and said "bo" while pointing at the boat. He made me into an even prouder father (than normal) and gave me the impression that he's going to be looking forward to fishing with me, (and his grandfather). And to be 100% honest, that's more important than any fish I would ever catch.

Here's a few pictures including one of the smaller musky's we caught. 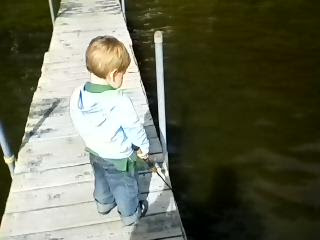 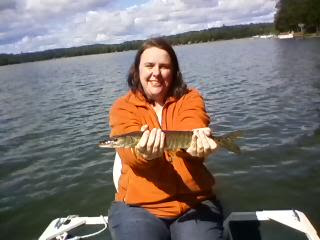 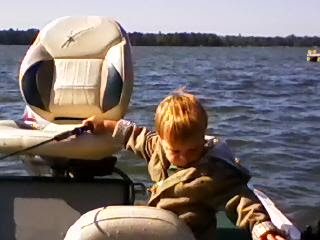 On a little family outing this week in St Germain. We're staying on Lost Lake in a cabin with some friends.

The fishing has been slow. Got a little action Saturday Afternoon from a Mid 40's Muskie. I had it up to the boat twice, but couldn't convert. Caught a few northern pike on spinner baits, but haven't found any walleye or bass that will bite as of yet.

The panfish and perch are biting though, and we're catching some keepers. Perch fry this week for sure.

Will post a complete report when I get back on the 13th.

Cheers
CT
Posted by Chris at 11:13 AM No comments: