I have been out quite a bit lately, and I've hit every one of the lakes I regularly guide on over the past two weeks. The signs point to an early and cool fall, and the fish are already making moves towards late summer-early fall patterns. That might not sound like a big deal, but the action is at least a couple of weeks ahead of the "traditional schedule."


The water is in the mid 70's on most lakes in our area. The most important factor right now, other than bright sun, is the quantity of baitfish. Huge schools of bait are running at, or just below the surface in both deep and shallow water, both of which are drawing attention from the gamefish right now.

Largemouth are holding along clumps of weeds on the shallow weed flats. Others are still hanging along the deeper weed edges. The majority of the fish are being caught out of 6-10 FOW, deeper fish are coming as deep as 25 FOW. Jigs, small crankbaits, texas rigs and wacky are all catching shallow fish. Swimbaits, deep running crankbaits and drop shotting are the hot bites for deep water.

Smallmouth are relating to weed clumps near or adjacent to rocky and sandy areas with a drop off. The deeper fish will bite best when they make a move into the nearby shallow water, typically something they will start to do a couple times a day. When the water and air temperatures begin to cool down some more, fish will use rocky areas in the early afternoons.If you can't find fish on top of shallow structure, look for them to suspend in deeper water nearby.

Walleye: Stick with live bait unless fishing over submerged weeds in the evening when you should consider throwing minnow-baits like rapalas and rouges. Look for walleyes to be in the sandgrass or in breaks in the weeds as deep as 35 FOW during the day. Some fish will be deeper or shallower on our local lakes, but the best approach to locating fish is to slowly troll with a slip-sinker or lindy rig with a big minnow or small sucker.

Northern: Most northern caught this time of year are caught while targeting other species, especially bass and musky. But they can still be caught and in good numbers. For bigger fish, try Deep diving crankbaits in bluegill, perch or white/shad color patterns. Hot N Tots, wiggle warts and the rapala deep divers are my favorites for trolling, while Norman D-22's or lipless crankbaits are better options for casting.Get adjacent to the deep weedlines, and get your baits at close to the defined edge as possible.

Musky: The fish are starting to make the transition, but the action is still a little slow. I'd expect that to make a rapid change after this week. Most fish are being reported from 10-15 feet of water but the shallow bite shouldn't be overlooked. Casting bucktails, gliders, swimbaits or jerkbaits all will draw some attention, but don't forget to keep a sucker or two out on a quick-strike rig. Many fish that follow a bait to the boat will turn on for the sucker hanging nearby.

Okauchee: Bass fishing is great, with lots of nice fish coming in. Shallow and deep patterns are producing. Musky fishing has been slow, but as fish start to come into the shallows to feed, it is likely to pick up. Pike fishing has been average, the deep weedlines have been the best, especially in Stumpy and just off the north flat.

Oconomowc: Bite is very good early and late, but action can be slow on the bright sunny days. Look for fish a little deeper than normal. Smallmouth and Largemouth action has been very good, pike has been good, but lots of smaller fish are being caught. Musky are feeding in the shallows, but lots of lazy follows continue to be reported. Walleyes are very deep, look for them in the sandgrass between 18-22 FOW, but as deep as 35 FOW.

Garvin: Panfish has been good, pike slow, musky has been great.

Silver: Bass fishing has been very good, and some keeper sized fish are being caught. Panfish have been slow.

Golden: Bass and pike have been very good early and late, with a drop off around 10am. Panfish are schooled up and suspended in deeper water.  Crappie are biting along the weedlines.

Moose: Pike fishing has been fantastic. Live bait rigs trolled just off the breaks has really been producing, especially with shiners. (Not fatheads!)


Next Local Fishing Report will be posted on 8-27-11, but drop by for reports from my trip up north.
Posted by Chris at 9:37 AM No comments:

Check this fish out:

I frequently hear from readers of this site that I don't post enough pictures of the fish I'm catching with people.

Fair enough: Here are Kristen and Matt Weir, with two of the more than 30 bass we caught on a half day trip last week. 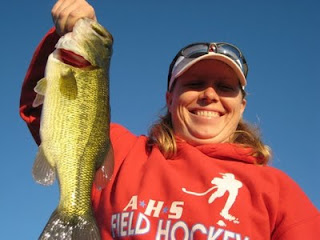 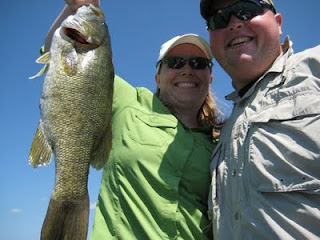 Cheers,
CT
Posted by Chris at 8:45 PM No comments: