Thank a vet this weekend. (Hell, thank one every weekend).

The story of the weekend will be unstable weather: www.wunderground.com's local forecast for the holiday weekend: 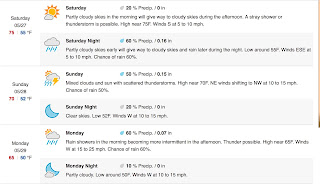 That's some nicer weather mixed in with some unstable conditions. That could make fish hard to pattern, and you should be ready to adapt on the fly while out for the next couple of days. Overall, water temps are in the high 50's to low 60's in mainlake areas and to low to mid 60's in the shallower protected areas. Current areas are still flowing very fast and strong, weedgrowth is far behind normal for this time of the season. A few Mayfly hatches have started.

Bluegills are starting to congregate in shallower water, but there's still plenty of keepers schooled up along the first deep break.. A few nests are starting to appear in the traditional sandy and gravel areas. Look for fish around woods or docks in 4-10 feet of water, and be ready to move shallower as the temperatures warm up this weekend. Current areas and spawning areas (like sandy or gravel areas) will have fish, as will isolated patches of weeds in 8-12 FOW. Waxworms,  redworms and plastics are taking fish, but bigger gills have been hard to come by in any significant number. (Try Okauchee, Garvin ( red hot!), Golden, Nag, Upper and Middle Genessee, School Section, Ashipunn, Pretty, Phantom and Lower Nashotah)

Crappie fishing has been slow. Most crappies are in shallow bays near weeds, wood laydowns or reeds. Some fish have spawned, but a few are still hanging around shallow wood and reeds in the usual areas. Minnows, hooked through the tail on a small hook (#8 or #10), waxworms and plastics have all been taking fish. Lots of fish are in small areas, so move until you find fish, and then set-up on them. (Try: Okauchee (especially the North Flat, Bay Five and the Crane's Nest), Garvin (North End), Kessus, Nagawicka (Channels), Golden, Silver, and Pine.

Largemouth bass are post spawn (for the most part) and fishing was inconsistent this past week. The weather kept lots of people off the water. Depending on who you talk with, people are catching fish targeting them in shallow water, but a few fish are still being caught off the open areas on flats with scattered weeds. It might be hard to consistently find bigger fish, but on warm afternoons, especially just ahead of the fronts that are set to come through this weekend, the action could be good in short spurts. Rocks will hold fish throughout the day, but you might need to move around and let fish reset on them. Drifiting/casting shallow flats will produce a mixed bag of fish that are done spawning and areas that having spawning gills in the shallows will also have LM nearby. What to throw: Shallow water presentations like jig and chunk or craw, wacky, texas rigged lizards, spinnerbaits or lipless crankbaits will all catch fish right now, but don't overlook smaller topwater presentations. Live bait, nightcrawlers, leeches, large shiners or small suckers are your best bet. (Try: Okauchee, Pewaukee, Lake Five, Oconomowoc, Pine, Lac Labelle, Kessus Nagawicka, Silver, Golden, Fox or Emily)

Smallmouth bass have been active, but are in the process of finishing the spawn. Rock structure, scattered weeds on sand and major points are all holding fish. Expect them to be a little spooky, especially in the shallow water on sunny days. Skirted grubs, jigworms, jig and craws, tubes, and soft jerkbaits are all catching fish. Go natural with your color choices this weekend. (Try: Oconomwoc, Pine, Lac Labelle, Nags, Pewaukee, North!, Lower Nashotah and the Nemahbin Lakes.)

Walleye have been active, with some keepers being caught in 8-12 feet of water. Slip bobbers, Jig and minnow, jig and leech, and split shot rigs with nightcrawlers or small suckers have been the best way to target eyes. In the evening, a few anglers are catching fish by working minnow baits (floating rapalas or rouges) over isolated weed clumps. This weekend should be red hot for walleyes, especially in the evenings, assuming the weather cooperates. (Try: Oconomowoc, Nags, North, Pine, (For Keepers), Lac Labelle, Pewaukee and Fox (for action))

Northern Pike fishing has picked up some and pike might be your best option for some steady action this holiday weekend with the unstable weather. Spinnerbaits, spoons, buzzbaits, lipless crankbaits, or suspending jerkbaits (like size 11 Husky Jerks or Rouges) are catching fish around shallow weed clumps, or at the edges of coves and marshy areas. If chasing pike with live bait, look for them in 6-12 feet, using small suckers or large shiners on a slip sinker rig or the largest shiner's you can find on a balloon rig around the deeper reeds in a marshy area. (Try: Okauchee, Kessus, Garvin, Nagawicka, Pine, Fowler (On Fire), Golden, School Section, Emily)

Musky Fishing has been slow, but steady. There are lots of fish in the shallow water chasing, and a few are even being caught on topwaters, but the most consistent action has been coming in 8-15 FOW around the transition areas of mainlake structure. Gliders, jerkbaits, swimbaits and bucktails have been productive, but many anglers continue to describe lots of lazy follows, so figure eights are required on every cast. Gold blade or orange blades with black skirt seems to be the color of the season, but chartruese/copper combos have also been catching some. (Try: Okauchee, Pewaukee, Fowler and Lac Labelle)

Around the area: Fishing on the Rock River has picked up again, and anglers are still catching a few whitebass south of Ft Atkinson, and catfish between the Jefferson Dam and the mouth. The action has been good when its on, awful when its not. Note that the water below Jefferson Dam is very high and very fast.

If you're in town for the holiday and want to talk some more specific tips, email or call me.

Have a great (and safe) holiday weekend.
CT
Posted by Chris at 2:07 PM No comments: