A long holiday weekend ahead! We're half way through summer...and fishing has been been consistent on our area lakes. Most water temps are in the mid 70's. Weed growth and baitfish populations are at about average for this time of year.

Obviously the lakes will be busy with the long day holiday weekend, so plan on fishing early and late, but if you can stand the boat traffic, fishing has been steady all day all the last three weeks.

If you're a newbie or casual fisherman....keep it simple. Get some leeches or small suckers and fish them on a slip sinker or lindy rig. Just keep the line tight and put your boat around the deep edges of some visible weeds. You will catch fish if you can stay in contact with the outside weed edge in 12-15 FOW while keeping your speed down under 1mph. If you're looking to cast some lures...try a lipless crankbait, spinnerbait or buzzbait.  Just cast it at any weeds you see, and reel it in as fast as you can.

Panfish Looking for action with the kids? Small panfish can be caught in shallow water using a small hook, bobber and live bait (I recommend wax worms or leaf worms on a small red #10 sized (Most swim rafts will have fish nearby).  Looking for keepers? -- The better sized fish are being caught out of the deeper water (12-18 FOW) by anglers drifting and fishing vertically.

Tip: If you're on a deep school, but not catching keepers, get your bait down a little deeper. Crappie are suspending over deep water, and along weed edges.

Largemouth bass continue to run traditional summer patterns.  Look for them in inside weed edges in 4-6 FOW  and the outside edges in 8-15 FOW. These fish can be caught on a variety of tackle, spinnerbaits, crankbaits, texas rigged wacky worms, jigworms, jig and chunks, skirted grubs and tubes. Piers are starting to hold fish and the slop has bite has been picking up. Topwater bite has been good until about 8:15am and then it has been picking up in the evening around 6:30-7pm

If you just want to catch fish, keep it simple...leeches on lindy or slip sinker rigs on the deep weed edge is an easy way to put some fish in the boat on just about any area lake. Follow the weeds out until they stop (usually in 12-15 FOW) and set up to fish. Remember to keep contact with your presentation.

Smallmouth bass fishing was fairly inconsistent this past week. Fish are using rocky points and bars especially early and later in the day. Most fish are holding on the deep side of breaks or suspending off mainlake structure, coming in briefly to forage. Skirted grubs, twister tails, tubes, wacky worms, lipless crankbaits, jerkbaits or floating rapalas are your best tackle options, but live bait like leeches and small suckers has been working for the people backtrolling deep sand/rock in 18-25 feet.

Tip: Flapper grubs and Ned rigs are still producing...using a lighter mushroom head with a natural brown or green pattern worm. Downsizing my wacky rigs to smaller Senkos or French Fry's has put some fish in my boat during slower stretches the last couple of weeks. The baitfish the fish are eating are on the smaller side this year...so it seems that downsized presentations are a solid plan.

Walleye fishing has been very slow daytime, but better during the beginning and end of the day. (Typical summer condition.) Anglers putting in time are catching a few fish. Fish continue to be caught along outside weed edges or off deeper flats with sandgrass. Slip bobbers or split shot rigs with live bait or suckers, backtrolled on lindy or a slip-sinker rig has been producing the larger fish. Fishing over the tops of weed clumps near breaklines with floating rapala minnows is grabbing a few as well, especially early and late in the day. Most fish are being caught along weededges in 12-18 FOW, but I've been catching them as deep as 25-32 FOW'

Pike fishing has been on fire with lots of smaller pike being reported. Active fish are using the shallow weedflats to feed on small baitfish, including last week's big hatch of juvenile panfish. Fish with inline spinners, lipless crankbaits, small bucktails or buzzbaits tight to scattered weedclumps in 4-8 FOW. Larger pike were hard to come by according to most reports, but if you want to chase them, try the weedline in 12-18 feet of water and fish with suckers or large shiners on a slip sinker rig.


Musky fishing remains slow for the most part. On the bright sunny days, target suspended fish out over deeper on lipless crankbaits, gliders and bucktails. Trolling at night has been producing a few fish during down moon cycles, but topwater fishing from 4-6am has been the most consistent way to catch a casting fish. I heard a few fish have been caught off the weedline on larger swimbaits, but only one person I talked with seemed to be talking that up the last week. Anglers continue to report lots and lots of lazy follows, so keep a sucker out. 12-15 FOW seems to be the magic depth over the past couple of weeks for sucker fish. (Essentially active fish patrolling the weedlines!)

Okauchee:  Bass are on the piers, in the slop and on the weed edges in 8-12 feet. Musky are feeding in the shallows in the morning, and then moving out to 18-22 feet. Nothing substantial to report on panfish, but look for keepers suspended over deeper water and on the deep ends of the mainlake points.

Garvin: Great spot for panfish lately with some nice keepers. Look for the sunken wood in 10-15 feet. Musky are still using the treeline break and suspending off the south drop. Bass are using the shallow flat on the south end. Pike are on the deep weedlines on the northwest and north east corners, and suspending over the deeper water.

Forest: Panfish and pike have been biting. Live bait over the deep holes on slip bobbers for panfish, inline spinners for the pike.

Oconomowoc:  Mornings and evenings have been best. Bass are holding on the obvious structural breaks and suspending off the deep ends of the mainlake points. Northern pike and walleye fishing has been best for anglers using small suckers catching the majority of the fish, pike was better than walleye during the day.  Musky fishing was slow, but lots of fish are still doing lazy follows, and lots of people are reporting that they are seeing fish in shallow water chasing juvenile gills.

Fowler: Small panfish are biting, a few LM were caught in the river and out of the deep slop. Pike are on the weedlines. No word on musky.

Lac Labelle: Walleye fishing is moving toward its typical summer pace. Weed edges along the 8-12 foot breaks are holding fish as are drop-offs in 10-18 FOW. Musky have moved out to suspend over deep water in the main basin. White bass have been stealing lots of bait from walleye and panfisherman.  Remember the new 28" size limit this season.

Moose:  Bass and pike continue to bite. Target the breaks and weed clumps in shallow water with crankbaits or spinners. Pre-rigged worms have been catching some bass by covering water around sctattered shallow wee clumps. Backtrolling with small suckers on a slip sinker rigs around the first major drop to deep water has been a hot tactic, especially in low light conditions.

Ashipunn: Bass and pike have been biting, and the action has been steady this year. Best bet on Ashipunn is to concentrate on the visible weed patches, and work them from a variety of angles with spinners or plastics. Slip sinker rigs with leeches fished tight to the weed edge worked for me with one of my kids last week, but we caught more fish on plastics than live bait.

Golden: Bluegills are moving out to deeper water, suspending over the deep part of the basin, but holding close to weed edges adjacent to deeper water. Bass have been biting best in the morning, but the deeper weedline bite has been picking up. Topwaters, plastics and spinners are all producing. Pike have been biting, especially on small suckers fished along the deep weedlines and on spinnerbaits fished over the submerged weeds.

Silver:  Bass can be caught using plastics around the weed clumps in 4-15 feet or around piers and boat lifts. Crappies have been suspending over the east cribs, and keeper bluegills are holding in the deep sandgrass in 12-18 FOW and suspending out over the deep basin between the mainlake points.

Lower and Middle Genessee: Panfish have moved to the deeper water with sandgrass, and largemouths are being caught around shallow to mid depth weeds. No word on trout on Lower, (fairly fished out at this point would be my guess)  Lindy rigging with live bait, especially leafworms or big reds has been very good for both bass and panfish. Night fishing is really picking up on Middle, especially along the deep points and drop offs. (In other words...it is July!)

Pine: Walleye, Pike, Largemouth and Smallmouth are being caught off the rocks early in the day, and off the weedlines in the mid-day and evenings. Slip sinkers with live bait will produce, but don't overlook crankbaits or slow rolled spinnerbaits for suspending fish. Fish have been coming very deep all day.

School Section: Bass and pike are biting, but most of the fish have been small. Look for the deep spots, and work them hard with plastics or live bait.

If you've got specific questions or if you're looking to get out while in town for the holiday: Feel free to email me.   I have some openings early next week and I can put you (and those kids) on some fish.

I have openings late this week, over the holiday weekend and next week for guided trips. 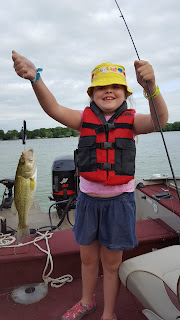 I'm kid friendly (I have five of my own) and I can put you and the family on some fish.


Email me for more information.
Posted by Chris at 10:20 AM No comments: