Things didn't quite go as planned today. I had arranged to take out a new client on Oconomowoc this afternoon, but it didn't happen.


As I was approaching the launch/dam area, I saw the Flight for Life Helicopter landing on Hwy 16 just past the dam. As I got closer, I saw tons of emergency vehicles.

Here's why: (Photos from Lake-Link.com) 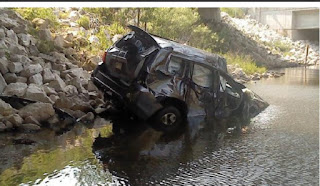 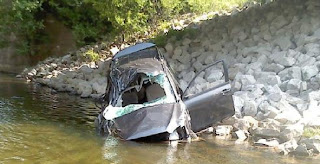 Story from Channel 12 is here.

The fishing has been very consistent the past week.

The relatively stable weather (and yes I remember the thunderstorm) has pushed the fish into a full spring pattern.

Condition wise: Weed growth is way ahead of itself this year, and water temps are ranging from the low to high 60's. You may find water as warm as the mid 70's in some darker bottom/shallow areas, espeically along windblown areas on the smaller lakes.

Panfish are moving into shallow cover in significant numbers. Wood laydowns, reeds and shallow clumps are starting to attract schools of fish. Crappie can still be seen congregating in the shallows around wood, while schools of bluegills and some yellow perch are starting to pop up around other types of shallow cover. If you're catching smaller panfish, move out just a little deeper and you'll probably find what you are looking for. Garvin has been on fire, but Ashippun, Golden, Silver, Middle Genessee, Forest and Moose have all been very good.

Largemouth bass fishing was fantastic the past week. Lots of male fish are up on the nests in shallow water, and many females spawned in the last few days, but there are lots of quality pre-spawn fish patrolling the shallows and foraging right now. Two pieces of advice: 1.)...beating the banks may find you a quality fish or two, but out over the flats with scattered cover will be more consistent. 2.) ...look for visible baitfish where you are fishing. If you're not seeing schools of shiners or juvenile panfish in the weeds or wood you are fishing on....you're not going to catch as many fish. I'm still working two patterns...a jigworm (alhtough a pre-rigged worm would work well, as would a smaller topwater bait) away from the bank, and a jig and craw in tight closer to cover. Wacky rigs and texas rigged lizards are also catching fish consistently...but natural colors seem to be outproducing the typical black/blue spring approach. Okauchee, Oconomowoc, Ashippun, Nag, Lower Nehmabin, Upper Genessee, Golden, Silver, Kessus and Moose have all been good.

Smallmouth fishing has varied lake to lake...primarily on the water temperature differences between our local bodies of water. Warmer lakes have fish on their nests, while the cooler clear water lakes still have lots of fish schooled up and on the pre-spawn feed. Keep it simple, play the water temperature game. Look for active fish in shallow rocks or sand. Patrolling fish will feed, fish holding tight to cover or the bottom are less likely to do so. This is a great time to use skirted grubs on a football head jig for shallow smallmouth. Pewaukee, Oconomowoc, Lac Labelle, Beaver and North have been the best.

Walleye fishing: Not much to report. Anglers who are chasing walleyes right now report finding them in shallow weeds in 6-8 FOW, or off the first break in 12-18 FOW. Finesse live bait rigs or small jigs tipped with leeches seem to be doing the job. Lac Labelle is always a solid bet for action, Oconomwoc, North and Pine are better options for keepers.

Northern pike have been active on most area lakes. Lots of smaller fish are being caught in the shallow weeds using spinners, buzzbaits lipless crankbaits, and minnowbaits. Bigger pike have been a little harder to come by, but dragging live bait-small suckers, chubs or large/jumbo shiners with a slip sinker rig off the first deep break is still finding a few quality fish. Watch for baitfish, and be ready to cover some water. Kessus, School Section, Nagawicka, Okauchee and Fowler have been fantastic, but don't overlook sleepers like Ashippun, Golden, School Section and Pretty.

Musky fishing has been a bit on the slow side, but some decent fish are still being caught in shallow areas close to where bass and panfish spawn. With Tournaments on both Pewaukee (Saturday) and Okauchee (on Sunday) lots of people have been out this week pre-fishing, so the fish have been a little pressured. I'd downsize your presentation a little bit, and unless your tournament fishing...I'd stick to the other bodies of water...Lac Labelle, Fowler or Oconomowoc.

Stocked trout are still being caught out of the area lakes and ponds...but if you want in on the action, best to get to it soon.

Whitebass are still being caught in FT Atkinson and near the Jefferson Dam on the Rock River. The Catfish bite has also been picking up a little bit as the water temperatures move up.