Well, its fall and the weatherman says you'll know it by the end of the weekend.

River fishing is picking up after the rains. Flows are marginal, and water levels low, but action is getting better on the Rock between the Jefferson Dam and the mouth at Blackhawk, below the Dam on the Wisconsin River in the Dells, and in stretches of the Fox (Oshkosh) and Wolf rivers.

The bite in every case is a multi-species bite, but reports are picking up in the wake of the solid rains.

Closer to home, reports have most of the musky lakes in a post-turnover state. Water temps are in the High 40's to Low 50's. Musky fishing has been slow, but steady but many of the fish coming in have been sub 40 inches (now the legal limit on our lakes).

Pewaukee has been good for numbers, with suckers and gliders catching most of the fish there.

Okauchee has been slow, but a couple of mid-40 inch fish were reported in the last week.

Fowler has been giving up some shorter fish, but the weeds are still making sections of the lake hard to fish.

Lac Labelle has been slow, but I haven't talked to many people who have been on it fishing, and they were chasing late season walleyes.

Oconomowoc has been better than average, with some very nice mid to high 40 inch fish reported over the last 10 days. Suckers have been converting lots of fish, especially the lazy follows Oconomowoc is known for.

A day on the water with Edwin Evers?!? 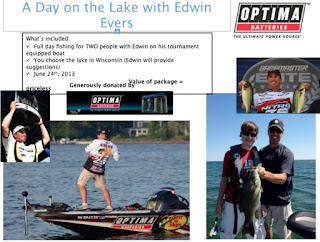 I'm not one who pushes the opportunity to fish with somebody else...but in this case I'll make an exception. Neighborhood House of Milwaukee will be auctioning off a day on the water with BASS Pro Evers at their auction on November 1st.