Morning Run: Fished 8:30-1pmish. Tough bite, scratched out some LM and Pike by  mixing up presentations in areas adjacent to spawning areas. Nothing consistent about the bite: Some came on wacky-rigs, a couple more on skirted grubs, and a couple more on lipless crankbaits. I didn't see many bass cruising, but did see a mid 40's musky with a 14inch-ish bass sticking out of his mouth swimming around in upper Oconomowoc.

Switched gears about 1:30, made a move to jig worms on the open areas on the windy flats and jig and craws in close...big change. Started hitting fish almost immediately, and started seeing some quality fish as the afternoon wore on. Ended the day with several quality fish (17+ inches) including a monster thick, prespawn female LM in Tierney that was pushing 5lbs, just before we called it a day.

Caught some nice fish on a 6" jigworm with a 3/32 ounce head fishing around the scattered weeds. Casting the jigworm was the most consistent producer, especially when making some drifts on the windy flat areas in Stumpy, Whitigers, The Saddle and Icehouse. Got out of the wind in some areas between drifts, and went after the fish in the shallow grass with a Dewy Special Jig and a Yum Craw Pappy trailer, both in natural green colors.

Only thing consistent was that fish came out of areas where there were visible baitfish. No food=no fish today- a equation that was certainly true this morning, but especially true this afternoon. Better fish were away from shore, but close to scattered weeds. (Otherwise known as classic pre-spawn LM activity) Still only seeing a few beds. Warmest water was 68 when I pulled out, up from 58 this morning.

Windy, but an otherwise beautiful day. Set to be a great week ahead. Good Luck....

PS: Pictures when I can get them up.
Posted by Chris at 8:51 PM No comments:


Finally seeing a batch of stable weather. The fishing is sure to pick up.

Reports have water temps ranging from between the high 50's to mid 60's on most area lakes, but weed growth is advanced for this time of year.

Panfish will  move into shallow areas, especially on warm, sunny afternoons. The bite can be really good, especially in the mid afternoon. Look for shallow, dark bottom bays with scattered weeds, woods or reeds. The fish may be very tight to shore, but don't overlook the first break into deeper water. In areas with current, look for schools of fish in deeper holes and outside turns, even if these areas are very small. Remember the largest panfish will always be in the bottom of the school, so if you're catching fish, but they are small, try getting your bait a little deeper. Bluegills will hit on a variety of live bait, including redworms, dillys, waxworms, spikes, or butterworms. For active bluegills, plastics will outperform live bait, and will usually help keep some of the smaller fish off your line. For crappies, tail hooked minnows, skirted grubs, road runners, or waxworms on an ice-fishing jig will really produce. (Try: Okauchee, Oconomowoc, Pine, Lac Labelle, Silver, Golden, School Section, Middle Geneesee or Nagawicka, and I'll point out that Ashippun is apparently the hot spot right now.

Largemouth are in various stages of the spawn. Lots of fish are still cruising the flats, while some males are up on the nests, especially in areas where the water is warmest. The bite has been inconsistent since Sunday's rain, but can be good at times. Look for LM in shallow areas with rock, sand or muck. Protected bays with wood laydowns or weeds will really concentrate fish. As the temperature warms up this week, look for more of the larger males to start making some nests around docks and other shoreline cover. Larger female fish will begin feeding on rockbars and around scattered weeds. You can use a variety of presentations to chase these fish. Flappers are a great option to find fish, before slowing down to make tighter presentations. Jig and chunks/ jig and craws/ jig and eels will catch less fish, but are a great way to catch a bigger fish, especially when fished tight to cover. Slower presentations like wacky worms, texas rigged lizards or tubes are all great for probing areas, but spinnerbaits, lipless crankbaits, and crawfish imitating shallow diving crankbaits will all catch fish right now. Using live bait? Leeches, nightcrawlers or large shiners are your best option. (Try Okauchee, Moose, Kessus, Golden, Silver, Fowler, Pine, and Nagawicka)

Smallmouth bass are starting to appear in rocky areas, cruising and foraging. Look for them in the usual early season spots, but don't be afraid to look for them as deep as 25 feet, where they will be feeding on schools of yellow perch. Spinnerbaits are a great way to cover water, tubes are a great way to look for fish around the dropoffs and on the shallow rockbars. Lindy rigging with large shiners can really produce some amazing fish this time of year. (Try Lac Labelle, Pine, Nagawicka, and Oconomowoc)

Walleye:  Look for walleyes in shallow water, around rocks or sand, or at the end of longer points especially early in the morning, and later in the evening. In the daylight hours, schools of fish will be cruising the sand flats in 8-15 feet of water. Live bait rigging, (Lindy rigs with small suckers!) jig and minnow or jig and leech combos, or trolling with shad or minnow imitators are your best approaches. (Try Oconomowoc, Lac Labelle, Fowler, Nagawicka or Pine)

Catfish were starting to bite more aggressively on the Rock River. Look for them around wood on the bottom, or in the channel turns. Stink bait, cutbait or nightcrawlers were all producing.

Trout fishing was consistent on the stocked lakes and ponds around the area.

----
The next two weeks will represent some great fishing.....get out there.

Cheers,
CT
Posted by Chris at 9:12 PM No comments:

Out today on Okauchee during the midday for a few hours. Picked up Frank, who was fishing at the launch from shore. Great guy and we had a fun, if less productive than hoped mid-day.

Moved around a bit looking for a consistent bite. Lots of little bass swimming in the shallows, saw a few on beds, but not as many as I would have thought. Lots of fish cruising still, very difficult to get them to bite.

Threw wacky, jig and chunk, texas rig and a worm rig I've been experimenting with. Best bite was on wacky, but got lots of bites where fish would only grab part of the worm.

Ended with 5 keeper sized bass 14-18in. Couple of females full of spawn, and probably had bites from another 9-10 fish, including a decent pike who took the trailer right off my jig.

Here's Frank with one of the bass. 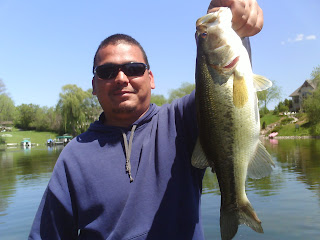 Cheers,
CT
Posted by Chris at 8:54 PM No comments:

Governor Scott Walker met with similar success to his predecessors in the annual Governor's fishing opener again this year. Like last year: a Shutout.

Next year: a Challenge to the Wisconsin Governor: I can help you to break this skunky streak.

Just Email me here we'll get you all fixed up.

Cheers,
CT
Posted by Chris at 4:22 PM No comments:

Got chased off the water this morning, just as we were starting to get bit...how was your opener?
Posted by Chris at 7:28 PM No comments: