Paul Smith's article on our Okauchee outing for Prespawn Bass is now posted.

You can read it here.

Well, there's not much I can say about the weather. Fish are biting, but biting better on the warmer/stable weather days. You can still catch fish on the other days, but the bite can be very tough.

Water is in the low to mid 60's on most area lakes. Weed growth varies, with lakes with large quantities of Milfoil already with explosive growth.

Panfish have been hit or miss. Schools of fish are holding tight to shallow weeds in 6-8 feet of water, or around docks adjacent to deeper water. The primary point of note is to make sure your presentation gets to the bottom of the school where the bigger fish reside. Stay small with presentations, waxies or spikes on a small hook or plastic for gills or yellow perch, tail hooked minnows for crappies. Be ready for light bites.

Bass fishing has been on fire the last 10 days as the prespawn period wraps up. Lots of fish moved to their beds during the later part of the week, and if you're heading out, be ready to fish for fish in each of the three stages..prespawn, spawning and post spawn. Jerkbaits, especially soft jerkbaits can be dynamite, but don't overlook jig and craw/chunk, texas rigged plastics, skirted grubs and shallow running crankbaits for bigger fish. Lots of guys are drop-shotting around bedding fish, or flipping around docks right now. Don't be afraid to pull back from the shallow water and look for active fish in 6-10 FOW.

Pike fishing has been pretty good, but with the prespawn bass activity keeping people busy, not many anglers are targeting pike. Buzzbaits, lipless crankbaits, spinner baits and spoons are catching fish, especially in shallow areas where weeds are coming up. Bigger pike have returned to deeper water, and a few people fishing deeper for musky have been reporting some active fish in the 10-15 FOW range.

Musky fishing has been spotty, with the fish exhibiting classic post spawn behavior. My only advice...fish shallower than you'd think. I stuck a great fish early this week in 2-3 FOW while bass fishing, and I saw another fish in the same area later in the week.

Look for an article in Sunday's Journal-Sentinel Outdoors section about the half day I spent with Paul Smith early this week.

Cheers,
CT
Posted by Chris at 9:34 PM No comments:

I get interesting emails sometimes....

I'm a Casting Associate with Top Hooker, which is a new competition show from the producers of Top Shot, Dirty Jobs, and The Ultimate Fighter. We are currently casting for the second season, and are looking for skilled and adventurous fishermen/women to be on the show. I wanted to reach out to you to see if this might interest you, your colleagues, clients, or friends.

The producers of Top Shot, Dirty Jobs and The Ultimate Fighter are seeking America's best and boldest men and women to take on the new season of Animal Planet's extreme fishing competition, Top Hooker.

On this hotly-anticipated new TV show, you and a handful of daring fishing enthusiasts will tackle exciting and intense challenges on America's rivers, lakes, streams and even the open ocean.

We are looking for COMPETITIVE, OUTGOING and SKILLED anglers, spear fishermen, game fishermen, fly fishermen, trawlers and trappers from all walks of life. It doesn't matter if your experience is commercial, sport or recreational. As long as you're skilled, adaptable and confident enough to take on anything we throw at you, you could win A BIG GRAND PRIZE and the title of Animal Planet's next Top Hooker.

Send an email to TopHookerCasting@gmail.com with your name, age, phone number, location, a recent photo (without hat and sunglasses please!) and a brief explanation of why you are
America's next Top Hooker.

A link with the rules and such is here: www.pilgrimstudios.com/casting/tophooker

Take a Vet fishing event in Madison on June 9th.

The 2nd annual Take a Vet fishing event is happening on Lake Waubesa on June 9th.


A Day of Giving Back

All boats will launch from Babcock Park starting at 6:30am

Veterans Memorial Party will start at 12:00 noon at McDaniel Park

Festivities will begin at 12:30pm with a flag ceremony honoring all of our active and retired US Military Veterans

Food will be served starting at 1:00pm. All families of participating military personnel are welcome to join the Veterans Memorial Party starting at 12:00 noon.

A Veteran Recognition Tribute will immediately follow lunch at 2:00pm. EACH VETERAN who participates in the event will be recognized with gifts, give a ways, and raffle prizes – all donated by our sponsors.

Space is limited! All entries will be on a first-come first-served basis!

I've gotten a couple of emails about the musky tournaments on Okauchee and Pewaukee this weekend.

I sent an email to the tournament organizers this morning to see if there's still room. I'll post the reply as soon as I get it, but if you wanted to pursue it yourself, the contact information for the WMT trail is available here.

Cheers,
CT
Posted by Chris at 5:55 AM No comments:

Had a couple of quick bursts of action, but was tough bite overall. All bass except for one shorty were 15-18.5 inches. Big fish was a unspawned female. Had one other female that wasn't spawned out, the rest were males.

Fished the usual early season spots, looking for warmer water and baitfish. There were fish in each area we fished, but getting bites was tough. Hooked a decent musky up in Tierney, but it got me wrapped up on a dock post. Tried to feed it line, and it ended up jumping a couple of times before breaking me off. Looked to be low/mid 40's.

Water dropped into the low to mid 50's during the cold snap. Was mid 60's when I was out on Thursday. Weeds are getting green, and have started growing big time. Water is high, and current is flowing through.

Fish were moving up, but there weren't many nests being guarded yet. I expect the warm up will put them on the nests pretty quick, and if you're fishing WABTA this weekend, you can probably plan on fishing for bedded fish.

Should be a busy week with the tournaments and such, but the fishing should also be pretty good as the warmer weather moves back in and stabilizes. 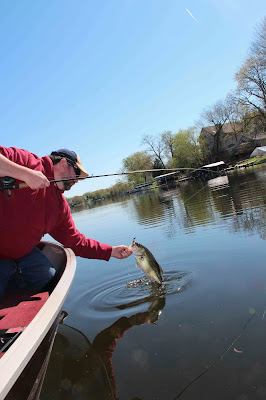 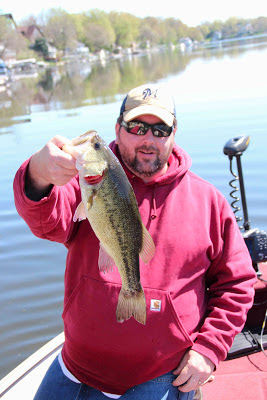