Conditions are leveling off

Water's cold, high and and fast. Time to anchor and fish three ways.
Posted by Chris at 2:24 PM No comments:

One reason I never gamble on fishing is that I live in Wisconsin. Mother nature has a way of setting things straight.

Level Continues to Climb
Posted by Chris at 7:32 AM No comments:

Check out Get Bit Baits

There's some neat looking tubes and grubs at Get Bit Baits.

I'll be getting some of this color tube for smallmouth fishing this year:

Get Bit Baits is a sponsor of the Wisconsin Badger Fishing Team. Drop by their site and say hello.

Cheers,
CT
Posted by Chris at 9:58 PM No comments:

But the flow is increasing quickly:

Stay tuned.
Posted by Chris at 7:33 AM No comments:

I don't want to say this, as I'm not much of gambling man, and especially as the weather turned south today, but based on the rising water, the moon phase and the water temperature, I would expect this weekend and early next week to be close to peak on the walleye run.

It always comes on so fast in Jefferson. When he was still around, Musky Mike and I would have the same conversation every year. As time has passed, I also seem to have a similar conversation with Becky Smith in most years. I know its a traditionally short run, and the spawning areas in the river are limited, but it really does move into prime time very quickly there.

Reports for the mouth suggest heavy fishing pressure, but with lots of anglers grabbing legal sized fish. That's a sure fire indication that the male fish are starting to move into the river in groups. If the reports I am seeing are accurate, the females will move in quickly and head for the spawning areas in the next 10-15 days.

It's time to hit the water.
Posted by Chris at 9:24 PM No comments:

Rock River is on the Rise

The rain and snow melt is increasing the depth and flow of the river. Here's the USGS prediction graph from this morning: 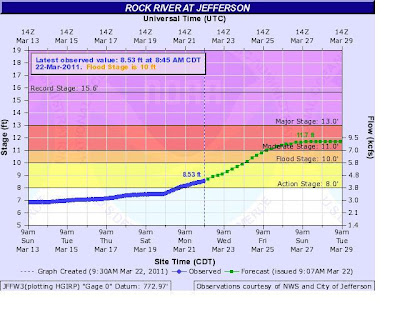 That makes this a decent flood for this year. It's sure to be above the wall at the dam.

Water discharge, velocity and temperature in Ft Atkinson are available here :From the USGS

For your reference: 5 Celsius is approximately 41 Farenheit. 6 Celsisus =42.8. In my experience, the Rock River run really gets started when the water hits 44. White bass will move in when the water hits 50-55.
Posted by Chris at 9:55 AM No comments:

This time of year, I always get some requests for information on fishing the Rock River. It's only natural given that as the ice gives out, the Rock River is one of the closest fishing options. The fact that the walleye and whitebass are set to make their spring runs is just icing on the cake.

First off: Here's a blurb from the DNR's 2011 Fishing Report:


Rock River — Enjoy the simplicity and excitement of white bass fishing on the  Rock River in northern Jefferson and Dodge counties in late April through early May. Boat launches in Fort Atkinson and Jefferson offer good access to the Rock and Crawfish rivers as this species moves upstream from Lake Koshkonong each spring. While angling for these plentiful fish, keep an eye out for tagged fish, part of an ongoing fish study aimed to evaluate the Jefferson dam fish passage effectiveness.

The fish passage serves to improve movement,reproduction and recruitment of fish species, such as sauger and walleye, by providing uninterrupted river access from the Indianford dam at Lake Koshkonong to the lower Watertown dam. Tags used in the study resemble two-inch, fluorescent pink pieces of spaghetti and are located near the base of the fish’s dorsal fin (the fin along the top of the back). Each tag contains a unique number that identifies the fish. Anglers should report tagged
fish, along with catch date and location, tag number, length, whether the fish was kept or released, and angler’s name and address to  Laura.StremickThompson@wisconsin. gov or (920) 387-7876.
Anglers are asked to not remove tags from fish they release.

River status at Ft Atkinson
Rock-Kosh Lake District
Public Boat Launches:
Riverview Drive (At Jefferson Dam)
K-Mart
Water Street
Note, the launch at HWY 26 is blocked off. If you want to access the mouth area, there is a paid launch at a bar on Blackhawk Island.
Links to JSOnline Articles about Fishing the Rock River in Springtime:
St Patricks Day in 2009
Early April 2008
Link to the fish passage camera:
At the Jefferson Dam
Posted by Chris at 11:55 AM No comments: